Stages of the Project 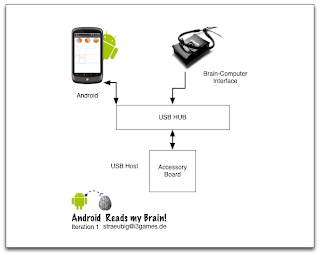 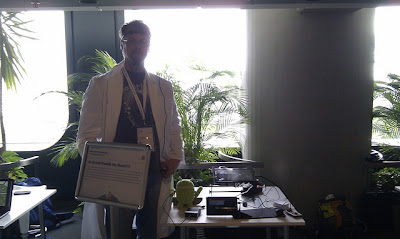 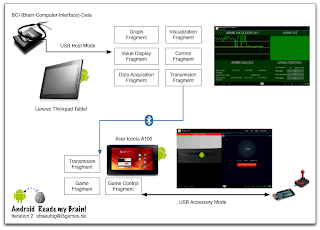 That was what actually happended. Includes a lot of learning about Android, BCI, USB, Bluetooth, Arduino, tech companies and people. 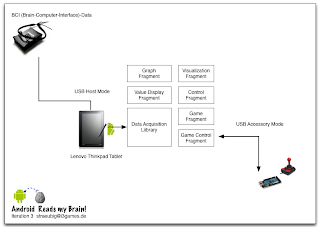 That's the current idea - see last post. Simplifying things, trying to run USB Host mode on one port and USB Accessory mode on the other. Kind of a re-entry of the initial design.
Posted by crcdng at 1:50 AM Links to this post

State of the Brainreading Union Address 2012

Two things happened.
We might never find out why (Heisenberg) but the ADK now works on the Thinkpad tablet.

Which means, the two-tablet (Bluetooth) solution to landing a Mars lander with your brain I came up with last year for Google Developer Day in Berlin (http://www.flickr.com/photos/55810307@N06/sets/72157627490063633/) might eventually be replaced by a one-tablet solution.

Both parts - the BCI interface and the Arduino-controlled Mars Lander are already implemented with fragments (http://developer.android.com/guide/components/fragments.html). The interesting question is if it will possible to talk to the USB-A port of the tablet via USB Host while the micro USB port is talking to the ADK.

Let's see. Work on the project has resumed.
Posted by crcdng at 3:41 PM Links to this post

State of the Android ADK?

I wonder what Google is up to regarding the ADK. There are still lots of people making amazing stuff, yet since Google does not move a finger since May 2011(?), maybe its time to switch to another library or method in connecting Arduinos to Androids.

Here is an overview at Arduino.cc
http://labs.arduino.cc/ADK/GettingStarted

The Android ADK however is still a (rather) hidden dowload, is not updated since 2011, has not moved into the main Android or Google distribution and mannufacturer support still is a game of luck. Try asking Lenovo for example, if an Android 3.1 tablet is supposed to support the ADK. (I did.)

The great manufacturer of my Android tablet device announced that they would update to Android 4.0.3 in May 2012. Now, maybe that gives a new boost to this project. Maybe Android Reads My Brain gets a new breath of life by then. Lets wait and see. I am patient, in a Zen-like way by now.

P.S. If you are part of a professional entity, please send e-mail using your business address if possible and try to describe your request in a way that passes a usual spam filter. Thanks.
Posted by crcdng at 1:59 PM Links to this post

This work is licensed under a Creative Commons Attribution-ShareAlike 3.0 Unported License.